Why is Your University WiFi So Slow? 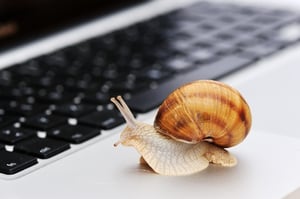 Are students, professors, and other faculty complaining about your university WiFi system?  As quickly as network technology is advancing, a network installed just a few years ago might already be bordering on out-of-date.

There are a lot of reasons users may be getting slow speeds.  Let's look at a few of the most common:

Six Reasons Your University WiFi May Be Suffering

Let's get the obvious one out of the way first: With each year, or seemingly even each month, apps and websites are getting more bandwidth heavy.  The near-ubiquity of streaming media means that even basic operations require more bandwidth than ever before, especially when websites are increasingly using auto-playing audio and video.

It may simply be that it's time to contact your provider and see about upping your speeds and bandwidth caps, to make more room for data-rich formats.

Is your WiFi still running on 802.11n or older access points?   802.11n has a top speed of less than half a Gigabit per second (450Mbps, to be specific) whereas even the first generation of 802.11ac can nearly triple those speeds, at about 1.3Gbps.  The newest 802.11ac Wave 2 hardware can go far beyond that, pushing 2Gbps or even faster.

If it's been a few years since your last network upgrade, it may be high time to embrace current technology.  It's vastly faster than previous generations.

3 - Too many competing wireless devices.

Another aspect to consider is the radio environment on your campus.  WiFi equipment uses radio frequencies, which are prone to interference if there are too many radios all broadcasting in the same frequency range.  This is especially an issue with 802.11n AP's, because their radio band - 2.4ghz - is the same one used by all Bluetooth hardware as well as a wide variety of other devices such as cordless phone handsets.

This is another reason why anyone still on 802.11n should upgrade as soon as possible.  802.11ac uses the 5ghz band and while it's possible for interference to play a factor there as well, it's far less common.  Also, most 802.11ac hardware has smart on-board systems that analyze the local radio environment and do slight shifts to the frequencies used to minimize interference.

Every AP has a maximum number of users who can be connected at once and, of course, its maximum bandwidth is split between those users.  Having too few WAP's in a university WiFi network can quickly cause extremely low speeds for individuals, or even prevent some people from connecting at all.  With low router density, roaming (moving around a campus with a stable WiFi connection) also becomes challenging or impossible.

If you've got plenty of bandwidth on the back end, but users are still complaining about slow or flaky connections, you probably just need more AP's.

There are a lot of physical elements to your campus which can inhibit proper radio transmission on your university WiFi network.  Physical barriers such as thick brick or concrete walls, embedded steel rebar, and standing water (like pipes or aquariums) will diminish or even entirely block their broadcasts.

Hiring a professional to do a heatmap and spectrum analysis of your location can identify these radio dead zones and recommend better router placement to avoid them.  In some cases, higher-powered antennas may also be needed to "punch through" obstacles, especially in buildings designed to be sound-proof.

"Mining" for crypto currency has been a growing trend in recent years. Most computers, nowadays, has enough hardware to mine crypto currency, but some gaming setups with multiple graphics cards are better suited and more capable for the task.

Since these systems are just left running at all times, it's constantly using up bandwidth. Many schools have caught on, and have placed certain restrictions to counter it, but is still unregulated on many campuses; as such, many campuses still face bogged down networks.

Likewise, P2P file sharing works similarly, with leaving the computers on, and allowing data to travel across the network, using up large amounts of bandwidth. This practice is being replaced more and more, with legitimate streaming video services. Yet, bandwidth usage problems still exist because streaming high quality video can easily eat up bandwidth use.

Is it time to update your University WiFi to take advantage of the latest technologies?  Hummingbird Networks specializes in affordable, future-focused wide-scale deployments.  Contact us for a free consultation!