Is It Cost Effective To Upgrade My Current Phone System To VoIP?

We'll be honest:  At this point, if you're still primarily using old copper-wire phone service for your small business phone systems, you're missing out on most of the current telecommunications innovations.

Ma Bell had a good run but, after a century, we've finally invented something better than copper for voice communications, and that's VoIP.  By moving voice services off of its own network, and combining it with your overall data system, you can open up a world of data-based telecommunications services which simply cannot be implemented effectively on copper.

On top of that, VoIP is far less expensive for everyday calling than the old telcos.  The fees are usually a flat rate per user, per month, and low enough that just a handful of long distance calls will justify the spend.  In companies with high call volumes, or dedicated inbound "1-800-" lines, the cost savings from VoIP can be absolutely tremendous:  50% of your communications costs or more.

Plus, once VoIP is in place, it becomes the ground floor of entirely new "Unified Communications" services which can be added on as needed, usually only with software changes.

The advantages of VoIP phones should be on every company's radar at this point, especially since copper subscribers are dwindling by the day.  The only issue is how to pay for the upgrades...

Keeping Costs Down On VoIP Upgrades

There are a lot of "luxury" or "executive" class business phones on the market which may make effective status symbols, but rarely justify their costs in terms of utility.   Is it really worth paying an extra $100 per-phone just to get a color display rather than black and white?

Pay close attention to the listed features, and don't get tricked into buying the one with the most bells and whistles.  If they aren't features you can see yourself using within a few years, they're a waste of money.

It's an unfortunately common issue among companies without enough technical know-how:  They buy new VoIP phones and then discover their existing network isn't sufficient to run them.  There's a good chance a move to VoIP will require a new server or network architecture, so remember to factor that into budgeting.

Old-style copper telephones were completely interchangeable.  New VoIP phones are less so.  While you can still plug nearly any VoIP telephone into any VoIP network and have it work, many phones these days are designed to work best, or provide more features, when paired with a particular brand of network hardware.

Plus, you'll almost always get better per-unit costs if you order in bulk, so don't do a VoIP upgrade piecemeal.  You'll save money in the long run if you just make the purchase up-front from a single provider.

The boom in VoIP phones and general business networking has also created a boom on the secondhand market.  It's increasingly common for a business to re-sell its old hardware to groups which refurbish the equipment and resell it for a fraction of the retail price.

When you work with a reputable partner and purchase certified refurbished equipment, you can get entirely functional phones with years of life left at vastly reduced overall costs.  When they're backed by a full warranty, the purchase is as "safe" as buying new.

Plus, depending on the situation, you may be able to resell your own phones or older network hardware to knock even more off your upgrade bill.

There's a true world of global telecommunications opportunities, and nearly all of them require VoIP as a starting point.  If you're still on copper cable, it's well past time to look towards a new voice network.

For a free network assessment, contact Hummingbird Networks today!  We can match you with a perfect phone system, and give top-dollar on your old equipment. 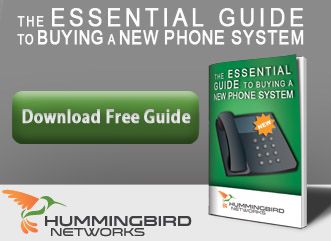