The Importance of VLAN Segmentation for Voice and Data

One of the best strategies for a company looking to host both data and VoIP traffic on the same network is VLAN segmentation.  If you're still hosting voice and data on a single VLAN, we've got some suggestions for why a change may be in order. 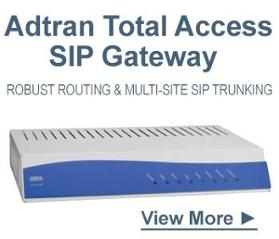 On a LAN powered by modern network OSes, such as the ADTRAN AOS software and Cisco IOS, it's possible to break up the LAN into multiple virtualized networks which exist on the same hardware, but with data streams kept separate from each other.  Having a VLAN is something like having a second switch inside your switch, dedicated solely to the traffic you put on the VLAN.

Moving your VoIP traffic onto a VLAN can bring you numerous benefits, both to your voice systems, as well as to your network at large.

The most immediate benefit that comes from virtually segmenting your VoIP is also one of the best:  you're likely to see a boost in overall call quality.  Why?  Because the VoIP packets aren't having to compete with data packets for priority.

VoIP is much less tolerant of dropped packets than data services, and even low levels of latency can turn into significant delays or echoing when VoIP is used.  Putting VoIP on its own VLAN lets you give it highest priority in the network, while allowing more fault-tolerant data processes to take the back seat.

Likewise, your Quality-of-Service and Voice Quality Monitoring services will be able to do a more effective job, and usually with less overhead on the server.  Since they're dealing with a less-congested network, they don't have to consistently filter through data packets to optimize the VoIP traffic.

One big concern among companies implementing VoIP is that it creates increased security risks.  There's a thriving new trade in VoIP fraud, with scammers worming their way into VoIP systems specifically to hijack your lines to place phone calls that you have to pay for.

VLAN segmentation for your VoIP allows you to put stronger security systems into place.  The packet routes and destinations are known ahead of time, allowing them to be filtered more effectively, with 'bad' traffic spotted easily.  Likewise, there are a number of VoIP-specific security protocols that keep your calls secure, but may interfere with data traffic.

Keeping your VoIP on a VLAN allows you to lock it down more tightly than if it's sharing pipelines with regular data.

It's often difficult to spot a misbehaving or (especially) an under-performing device on a mixed network because there are so many different types of traffic flowing at once.  That makes it difficult to spot a "weak link" in your network, or to find devices creating bottlenecks in the traffic.

With VLAN segmentation, your VoIP traffic is distinct and kept to itself.  Devices being used by that VLAN are dealing with highly regular and predictable packet types, which makes troubleshooting far easier.

When there's only one traffic type, the weak points in a network stand out much more easily.

Are You Segmenting Your Network?

If you're still handling all your data on a mixed network, it's time to think virtual.  VLAN segmentation brings significant performance and security enhancements, while taking little or nothing away from overall network flow.  In some cases, it may even improve your data performance, since you can put similar optimizations in place on the data-side VLAN.

Poor VoIP performance can easily hinder a business that relies on its voice communications.  A well-segmented VLAN helps ensure your voice quality is as good as possible.

Need more advice?  Contact Hummingbird Networks today to discuss VoIP systems and how to craft the best network to meet your needs!

Special thanks to Michael Saulter for contributing to this article.