One question we commonly hear about Cisco switches is "What's the difference between different levels of IOS software?"  This is a good question, and one that's often difficult to locate within their materials.

Any piece of Cisco hardware is going to ship with one of four basic editions of IOS.  They share version numbers and updates, but have different levels of service attached to each.  These are "LAN Lite," "LAN Base," "IP Base," and "IP Services."

So in this article, we'll provide a brief overview of what these three IOS editions are and who might want to use them. 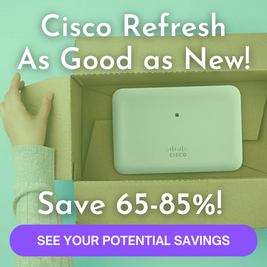 Let's look at this from least- to most- feature packed.

LAN Lite is the least-expensive and least-robust IOS version.  It's considered entry-level, and is only bundled with their small-business hardware.  It only supports Layer 2 routing, with a bare minimum of VoIP enhancement and security services.

It's fine for a small office installing their first modern network, but not for more than a handful of users.  It's almost always worth getting a better version.

LAN Base is a good choice for small-to-medium sized businesses that want a robust and flexible network OS.  As the name implies, it's largely aimed at networks installed in a single location with a single LAN, and lacks most features associated with maintaining a WAN or other distributed network.

The two IP named IOS versions are intended for larger enterprises, especially those on a metronet or with multiple offices.  They're focused around maintaining overall network security and overviews, while enabling high degrees of scalability.

IP Base is for medium-large businesses, with features to match.  One big upgrade is fully-featured Layer 3 dynamic packet routing, alongside support for Layer 2 static routes.

You also get much more robust edge security, with full support for VLANs and encrypted VPN tunneling. TrustSec, SXP, and 802.1AE security systems are also included in the hardware.  Likewise, VoIP is improved further, with AutoQOS systems optimizing voice/data transmission on a per-VLAN basis.

At the top end is IP Services, aimed almost exclusively at very large-scale operations managing vast networks between many offices.  There are relatively few differences in features between IP Services and IP Base, with most of the differences involving the size and scale of the systems involved.  IP Services supports more locations, more users, etc, with scalability that's nearly unlimited.

IP Services does come with much more comprehensive Layer 3 routing options, as this is one of the biggest challenges as a network continues to grow.

Finally, if you're already a registered Cisco user, they have an online tool to help you sort out which version of IOS you want.  It's the Cisco Software Adviser.

Or, of course, if you have any other questions about Cisco or Cisco IOS software packages, please don't hesitate to contact us here at Hummingbird Networks!