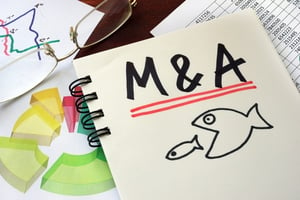 If you happen to be following business news as of late, it's getting absolutely exhausting.  2016 has been absolutely chock full of major mergers being announced, and while some of them are still in limbo or have questions about approvals, there's still a lot of change happening in the tech industry right now.

A lot of companies are understandably concerned about all this wheeling and dealing, since the effects a major merger can have on an industry are often unpredictable.  Or, when it is predictable, it often seems to only be good news for the companies involved.

So today, we wanted to do a quick rundown of some of the most major merger announcements lately, and give our opinion of what sort of impact they might have.

If media integration is a topic you're concerned with, there's a lot to sweat about the proposed buyout of Time Warner by AT&T.  At a pricetag of more than $85 billion dollars, it's the biggest proposed deal of the year.  This gives AT&T an almost unprecedented level of vertical integration.

The effect from this would largely be on the entertainment industry.  It wouldn't be hard to predict AT&T attempting to form a competitor to Netflix with it.  Of course, with several other studios -including Paramount- doing the same, this could easily fracture the digital-distribution industry.

However, the deal is also facing a lot of scrutiny, even at the highest levels.  Donald Trump has already gone on record saying that if he wins the Presidency, he'll oppose the merger.  Hillary Clinton hasn't taken a hard stance, but promised that the deal would be closely examined before a decision is made.

This one is interesting, and potentially a very smart move by Qualcomm - as well as much less likely to bring about too many regulatory barriers.  NXP Semiconductors is a somewhat niche, but highly-valued company which is almost solely focused on providing electronics systems for trucks and automobiles.

This gives Qualcomm a direct manufacturing source, as well as opening the door for them to become dominant in automotive electronics almost overnight.  And with self-driving cars being one of the hottest of technology topics at the moment, it seems like a smart move to get a major foothold there.  Since Qualcomm already did a lot of business putting cellular systems into cars, it makes a lot of sense.

Getting more speculative, this could even give rise to networked cars "talking" to each other.  Many problems with self-driving technology would be eased if self-driving cars could be aware of each other through more than just visual means.

Broadcom traditionally sells chips that go into practically every major brand of network hardware on the market.  Brocade -among other things- sells network hardware that competes with Broadcom's customers.  This would obviously be an awkward situation, so Broadcom has announced their intention to sell off pieces of Brocade which would create a conflict of interest.

What's left?  An extensive network of online Storage Area Network setups.  So it's not hard to guess Broadcom wants to get in on the cloud storage game, possibly offering services to their partner companies who can't afford their own network.  This one should be interesting to watch, but may be traumatic to buyers of Brocade's IP network hardware.

This is the real wild card of the group.  Back in June, Microsoft announced their plans to buy social networking giant LinkedIn for over $26 billion.  That left analysts scratching their heads, and even today it's still up in the air what, exactly, Microsoft intends to do.

Are they simply uncomfortable by the competition posed by Google and its integrated vertical services?  Is there some longer-ranged plan to integrate LinkedIn directly into Windows or other cloud-based Microsoft services?  Does Microsoft want to get into the headhunting game?  Is it just about getting access to LinkedIn's huge treasure trove of user data?

LinkedIn headhunting competitor Salesforce is -understandably- very concerned and calling for extra regulatory scrutiny of the deal.  However, it seems unlikely governments will block this, just because it's such an oddball arrangement.  Not unless new information comes out, anyway.

What do you think?  Will any of these mergers affect your job?  Let us know!