Meraki Z1 Review: How It Meets The Challenges Of Telecommuting

There's no doubt that -while still controversial in some circles- telecommuting is on the rise.  While it's a somewhat poorly-defined term, broadly speaking, telecommuting simply means a worker staying at home and using modern communications to work as though they were at the office.  This usually involves aspects like accessing work servers, tele/video-conferencing, and working on shared documents in cloud space.

As of 2015, over one-third of the American workforce was telecommuting, along with an estimated 50+ million freelancers also working from home as independent contractors.  That represents a lot of people eschewing traditional workplaces. 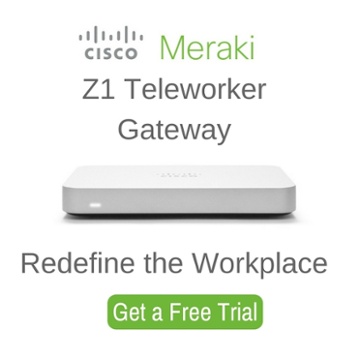 Further, this can be advantageous for both sides.  Home-based workers aren't necessarily tied to a traditional 9-to-5 schedule and often have an easier time managing their work\family balance.  Someone with a toddler, for example, can be a stay-at-home parent without sacrificing their paycheck.  On the employer side, it usually means reduced overhead, smaller office space needs, and other cost-cutting measures.

So what's the problem? Besides the possibility of having your children interupt your live television broadcast like the infamous "BBC dad"? In a word: security.

The Security Risks of Telecommuting

In a world where cyber-crime is on the rise, telecommuting presents some fairly significant risks.  Some of these can be mitigated through better training and better hiring practices, but others are simply a byproduct of the entire system.

As we said, some of these can be mitigated.  It's increasingly common, for example, to use remote-access virtual machines as a way of segregating the user's home machine from the work network.  However, these solutions can be hard to implement, as well as generally requiring a fairly high-powered and consistent home broadband connection to implement.

However, at least one brand of networking vendor has been looking into the problem, and offers a solution:  Meraki and their Z1 Teleworker Gateway.

The Meraki Z1: A Unique Solution To Unique Problems

The Meraki Z1 is, to our knowledge, the first piece of hardware specifically designed to address the problems companies and telecommuting workers face.  It's low cost to purchase and license, and it's a very small portable device designed to go anywhere.  Yet it packs a lot of features: 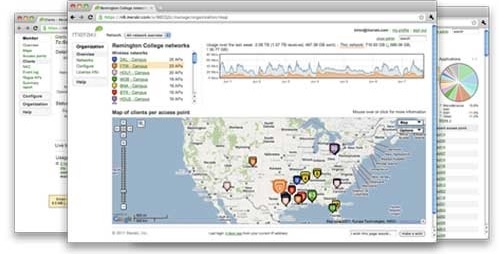 In other words, it's basically an all-in-one connection hub that crams all the features of a Meraki network into a single piece of hardware.  Further, as a Meraki device, it can connect to and interface seamlessly with existing Meraki networks, while also being managed remotely via the Meraki Dashboard.

In theory, a home-based worker could even use it as their home's primary connection portal, with one SSID devoted to work connections and the other(s) passing directly through to their local ISP for family use.  Or it could work side-by-side with their existing equipment.  Alternatively, it could also be used to support other Meraki productivity devices in their home office such as IP phones.

On top of that, it's also a perfect option for situations such as remote point-of-sale kiosks, worker access at trade shows, traveling salespeople staying at hotels, and other temporary-access scenarios where security is still vital.  Plus, it can be pre-configured at the office and simply shipped off to the worker.  All they have to do is plug it into their local network, and it automatically connects to the work network without any other manual configuration required.

While it's probably impossible to achieve 100% security parity between home- and office-based work, the Z1 really helps get closer.

As the demands and trends in workforce patterns change, networking systems need to be able to keep up.  This is exactly what Meraki is trying to accomplish with the Z1.  There's nothing else quite like it on the market, and it's an excellent option for businesses that need to maintain high levels of security even with a distributed workforce.

If you have a significant number of telecommuting workers - or are considering the implementation of telecommuting policies - contact Hummingbird Networks to discuss how a Z1 deployment can vastly reduce your security risks.