The Most Important Cyber-Attacks Of 2016

Was 2016 the worst year yet for hack attacks, cyber-crimes, malware, and other forms of online malfeasance?  The jury is still out, but it seems likely.  The scope of attacks seems to be getting bigger, the amount of damage (potentially) done larger, and the range of targets growing wider.

As we did last year, it's time to take a look at some of the most important cyber attacks of 2016, and -if possible- what can be learned from them.  We're not going to attempt to sort these into any kind of ordered list because there are simply too many apples-to-oranges comparisons involved.  Not to mention that, in many cases, the damage is probably still ongoing.

I.  Yahoo Goes Big In The Wrong Way

There's no way to talk about 2016 hack attacks without Yahoo getting prominent mention.  Over the course of the year, Yahoo revealed the existence of not one but two major intrusions, each affecting hundreds of millions of users.  They did not occur in 2016, rather in 2013 and 2014, but (or so Yahoo claims) were not discovered until last year.  Estimates are more than one billion accounts were compromised, although it's impossible to say at present how much overlap there is between the two stolen data sets.

This is by far the largest amount of user accounts stolen from a single company.  The only good news is that the data was mostly items such as emails and phone numbers.   the passwords were still hashed, thankfully.

This is a contentious issue, so we won't spend too much time on it... but there is real doubt that major powers in this world are seeing the potential in cyber-warfare for disrupting their opponents.  At the very least, the Russian hack of the Democratic National Party shows just how influential such attacks could be.  Other states, such as North Korea, have also claimed to have such capabilities and yet others - like China - are widely suspected even if they've never tipped their hands.

And it's also a growing concern closer to home.  One of the biggest tech\politic mashup issues of 2016 was the question of whether the FBI had the authority to compel Apple to unlock its own devices, and how much culpability Apple might have if they refused.  While the FBI eventually backed down - kind of - this is far from a settled issue and future court rulings in either direction will have far-ranging impact.

3 - A Utility Goes Down For The First Time

At least as far back as the 1980s, the possibility of hackers compromising major utilities or public information databases has been a frequent source of worry.  (And Hollywood movie plots.)  This became real at the end of 2015 and beginning of 2016, when an exceptionally well-coordinated attack successfully disabled a large chunk of the power grid in Ukraine, leaving over 200,000 people without power and the power-station owners locked out of their own systems.

It's easy to say "Well, that's Ukraine" and ignore the larger threat this represents, but it shows just how savvy attackers have become.   It also suggests that utilities around the world now need to step up their security game, as well as having solid backup plans in place for dealing with potential attacks.

4 - The Biggest Bank Heist Ever

In what was probably the biggest single haul from a bank in history - not just in cyber-crime - attackers targeting the Bangladesh Bank managed to steal an astounding $81 million in money, as well as shutting down more than $800 million in pending transfers.

This wasn't just an attack on a developing-nation bank.  The attackers had deep knowledge of SWIFT, a global system for maintaining electronic money transfers between major banks everywhere.  If SWIFT ever became compromised, it would mean a literal world of hurt.

5 - A Rise In Individual Attacks

Finally, looking at the smaller scale, it's worth noting that individuals are now increasingly in the crosshairs of hackers.  Beginning with late-2015's infamous hack of celebrity cell phones and release of their private nude pictures, stealing data from high-profile individuals became big business.

Notables such as Facebook founder Mark Zuckerberg, Google CEO Sundar Pichai, as well as both former and current Twitter CEOs Dick Costolo and Jack Dorsey were targeted, among many others.  Possibly the most worrisome, however, was the unprecedented attack 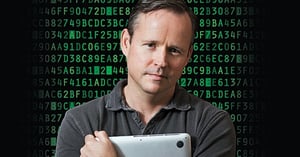 launched against cyber-security researcher and journalist Brian Krebs.  He suffered one of the most massive DDOS attacks in history, ultimately withstanding an onslaught of more than 600 Gigabits per second.

He was probably one of the few individuals who could hold up under such an attack... but few other organizations could.

What do you think?  How will technology adapt to prevent more crimes in the future?  Let us know below!