When we're discussing various options in networking with our clients and Meraki comes up, one of the biggest points of contention is often their licensing system. Some people are -understandably- a bit nervous about investing in networking hardware which must always be kept under license to continue functioning at all.

It's true that the Meraki license system is a bit controversial, but in the grand scheme, it brings more value than you might think! So let's take a look...

The Downsides and Upsides To Meraki Licensing

It's accurate to say that Meraki requires a license to function. If you don't keep the licenses current for all Meraki hardware on a system, the entire network will cease to function once the license period expires. And that is a pretty significant penalty, considering that there's no other network hardware this is true of.

Of course, Meraki is also the only vendor to use a revolutionary cloud-based network system to link their devices, and that cloud network costs them money to run. Without the cloud system, their decentralized approach to network simply cannot work.

On the other hand...

The good news is that the Meraki license system is made to be as painless as possible and it delivers a significant value for your investment beyond simple access to the cloud management system.

What value is that? A properly-licensed Meraki network has lifetime warranty coverage, with next-business-day parts replacement in many cases. You also get unlimited technical support via any medium you need, even telephone.

Virtually every other network vendor on Earth demands high prices for extended warranties or telephone support beyond a year or two. Some restrict their free-with-purchase support to just a few months. While obviously individual cases will vary, we find that the total cost of Meraki ownership often remains lower than other brands if the costs of extended warranty and support are factored in.

So the licensing for continued operation actually goes both ways - your money guarantees that you will always have functional service, no matter how long the equipment is in use. 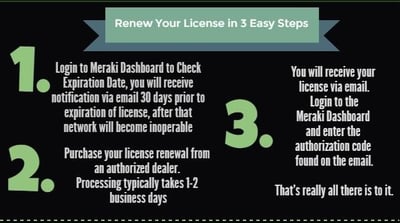 The Ease Of Meraki License Renewal

If you have any fears that Meraki is trying to get you into a "gotcha" situation regarding the licenses, they've actually gone out of their way to ensure the system is simple and the user is given ample opportunity to stay in compliance.

1 - You receive plenty of notifications, beginning 90 days ahead of the license end date, delivered both by email and within the administrative console. End-of-license can never be a surprise.

2 - If the system falls out of license, you actually get a 30-day grace period where it continues to function normally. There are no fees or penalties if you're late in renewing.

3 - If the network is shut down due to non-licensing, your settings are retained in the system for some time afterward and can be immediately restored once you bring licenses into compliance. Again, there's no penalty for late re-licensing except for the downtime involved.

4 - Inputting the licenses is simple, just a matter of cut-and-pasting numbers which are emailed to you.

5 - If you buy licenses at irregular intervals, the system automatically spreads your licensed months\years across all devices, so that you always have only ONE renewal date.

Meraki is the next step forward for networking, and arguably the first truly successful and scalable controller-less networking system. To learn more about its unique benefits, just contact Hummingbird Networks!