We've seen a lot of buzz since our announcement that we are now carrying Ubiquiti WiFi access points and other hardware.  Ubiquiti are relative newcomers in the WiFi game, but they've made a big splash in a very short time.  Why?  Because they offer enterprise-grade equipment at prices which are drastically lower than the competition.  So low that they're competitive in the consumer market, while still delivering high-quality kit. 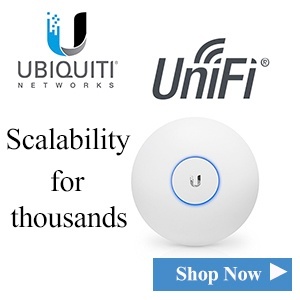 Now, obviously, there are tradeoffs.  Ubiquiti has what one might call a "" or no-frills approach to their products, particularly when it comes to software.  Their equipment lacks the high-grade automation seen in competitors such as and also doesn't have fancy features built into the firmware such as firewalls or anti-virus software.  When you buy Ubiquiti access points, you're "just" getting an access point and little more.

However, when Ubiquiti costs a fraction of even their lowest-cost competitor, there's still a lot of argument to be made in favor of buying them.  Plus, they have a very nice Dashboard GUI system which is still easy to use - it simply requires admins be a bit more hands-on, and supply their own security solutions.

But with a new brand, we're getting a lot of questions about the capabilities of the equipment - particularly, people want to know about the difference between the AC-LR and AC-PRO models.  So we wanted to address that, as well as clarifying the differences between other common access point models.

The AC-LR is a specialty device which is intended specifically for situations where you need to broadcast a WiFi signal for an extended range, using high-gain antennas.  It has a maximum range of about 600 feet, whereas most other models only broadcast up to around 400 feet.

However, there's an important thing to keep in mind here: WiFi is a two-way street.  Many receiving devices, particularly smaller ones like cell phones, don't have the transmitting capability to broadcast 600 feet back to the and thus drop the connection.  So can be rare.

The is limited to 400 feet, but it has a 3x3 MIMO array on the 5ghz band, as opposed to the AC-LR's 2x2 array.  So, you get roughly 33% faster speeds 802.11ac speeds from the AC-PRO.  The AC-PRO also includes a secondary Ethernet port for direct hardware connections.

As such, the AC-PRO is generally a better investment than the AC-LR, even if it does cost a little more.

The AC-LITE is Ubiquiti's entry level model, with prices often well under $100.  As such, it's one of the most affordable 802.11ac APs on the market today.  However, it's also the slowest model Ubiquiti makes, with maximum speeds of 300Mbps on 2.4ghz and 867Mbps on 5ghz.

So, it's more of a consumer-level device which could also serve well enough for a single small office or home office that doesn't have huge bandwidth demands.  At the price, it certainly isn't a risky buy.  It's also surprisingly small and can be attached practically anywhere, which could be a benefit to those working in tight quarters.

But, it's not going to be capable of handling the workload of some of the larger models.

The top end of Ubiquiti's line is the AP-AC-HD, which costs roughly three times what the AC-PRO does.  Of course, even then, it's still only about as much as the low end of most other brands' product lines.

The key points of the AP-AC-HD are that it has superior speeds - up to 1.7Gbps total - as well as having more on-board software features than the other models.  It can handle tasks such as guest control and URL filtering.  The AC-AC-HD is a good choice for hospitality businesses, such as cafes or hotels, looking for a cost-effective solution for providing guest WiFi access.  It's easily the most affordable product on the market for such applications.

Of course, it could certainly be used in an office as well, if you wanted to take advantage of its higher speeds.  Two LAN ports also give it more flexibility in implementation as well.

If You Need High Speeds On A Budget, Look To Ubiquiti

Hopefully, you have a little better idea about the aims and capabilities of the main Ubiquiti access point models.  They aren't the most feature-rich APs on the market, but if you need a cost-effective solution for adding basic high-speed 802.11ac and 802.11ac wave 2 to your home office, business, or hospitality establishment they can easily make a case for themselves.