The ADTRAN Bluesocket system has already been gaining traction as one of the best options in virtualized networking, thanks to its ease of use and setup.

It's now gotten even better with the addition of the Bluesocket BSAP 2030 wireless access point, featuring faster speeds than ever before and a greater focus on BYOD compatibility.

Bluesocket is a perfect fit for large institutions, such as schools or hospitals, that need a WiFi network that's easy to deploy and manage. Or, a small company that starts out on Bluesocket will see a simple and painless upgrade path ahead of them for years to come.

Reasons Why The Bluesocket 2030 Is On Top Of Virtualized Networking

The hallmark of Bluesocket is simplicity. After the initial software installation -which Adtran or your dealer will assist with- the system effectively manages itself. Because it's a virtualized vWLAN, the network OS "lives" on the network itself, freeing it from the restrictions of a central server.

The long-term upshot to the system is this: Afterwards, the upgrade process boils down to buying a new Access Point, plugging it in, and adding its serial number within the network OS.

Everything else is configured automatically, and the new AP's capabilities are then added to the network as a whole. Future deployments only take a minute or two.

The 802.11ac standard is currently top-of-the-line in networking, with true Gigabit throughput to connected devices - up to 1.75Gbps! If you have 11ac approved devices and the proper infrastructure, Bluesocket can now provide the same speeds as a dedicated server-client setup.

This is combined with a range of features to ensure optimal transmissions in an environment full of RF broadcasts. The Bluesocket 2030 features both 5ghz and 2.4ghz antennas, to use a wider spectrum of frequencies.

It also includes ADTRAN's proprietary DynamicRF detection and adjustment systems, which scan the environment for interference and automatically changes frequencies to a clearer channel.

In an office with an abundance of wireless devices, Bluesocket keeps interference from slowing you down. 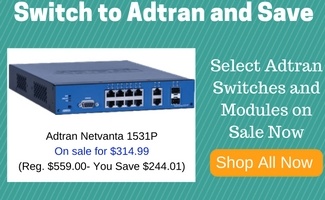 Bring-Your-Own-Device has gone, in just a year or two, from being a theory to becoming a nearly-mandatory practice. Workers are bringing and using their personal "smart" devices in ever-greater numbers, and your WiFi network should be ready for the challenge.

The BSAP 2030 keeps you covered here:

The newest Bluesocket APs bring with them the latest iteration of ADTRAN's lauded AOS operating system, currently the industry standard for power that's easy to use.  Your entire network can be controlled and overseen by one person, easily.

If you're already looking into an 802.11ac upgrade for your systems, it's the perfect time to think "Bluesocket." The BSAP 2030 wireless access point lays the foundation for a simple, robust, and easily-managed vWLAN that can expand as far and as quickly as your business requires.

To learn more, just contact us for a free consultation!