The great thing about optical transceivers in networking hardware is that they allow a single piece of equipment, such as a switch, to support different wiring and transmission formats.  The problem comes when trying to figure out which of the many transceiver types out there you need.

So today, we wanted to quickly lay out some of the major differences between the most popular transceiver types.  This is far from a complete list, but covers the ones that are commonly requested and installede most commonly deal with...and remember, you can't fit a square peg in a round hole (almost literally here), so even if you like the specs of one style, it doesn't mean it will work in all equipment...consult a datasheet or give us a call.  Let's get started. 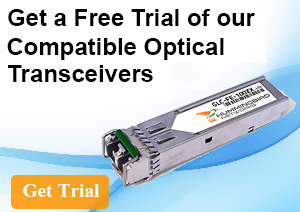 The Small Form Factor Pluggable (SFP) was among the most popular transceiver formats, although it's beginning to fall into disuse due to limitations in the format.  It's hot-swappable and pluggable, allowing for a higher density of ports in networking equipment.  It has a theoretical maximum speed of 5Gbps, although in practice, it's most often used for 1Gbps connections.

SFP comes in many flavors supporting a variety of wiring types, including Ethernet, SONET, single-mode fiber, and multi-mode fiber.

SFP+ is the enhanced version of SFP, mostly varying by how much data it can support.  The maximum transmission speed of SFP+ is 16Gbps, but it's generally used for 10Gbps fiber or Ethernet connections.  The other major difference compared to SFP is that it uses a more efficient encoding method, which is a large part of how it can carry more data than SFP on nearly the same hardware.

XFP is one of the oldest transceiver standards still in use, having been first defined in 2002.  New equipment supporting XFP natively is somewhat rare, but it remains popular due to legacy use.

XFP supports up to 10Gbps connections for Ethernet, fiber, or SONET.  In fiber applications, it allows high-density multiplexing for enhanced transmission, as well as supporting -LC fiber connectors.  The main advantage of XFP over other 10-Gigabit formats like SFP+ is that it features lower power consumption.

Standing for Quad Small Form Factor Pluggable, QSFP is effectively four SFP+ connections crammed into a single transceiver.  The basic QSFP format supports up to 40Gbps on either Ethernet or Fiber, along with SONET and Infiniband.

The format has been consistently evolving, and "basic" QSFP cabling and connections are fairly rare today.  Most would be considered QSFP+.

There isn't a hard line separating QSFP and QSFP+, as these various transceivers are all based on the same technology but with incremental improvements over the years.  Generally, QSFP+ is any QSFP- style transceiver which supports data rates higher than 40Gbps.

Currently, the highest-speed format is QSFP28, which allows four simultaneous 28Gbps connections, or a total of 112Gbps.  As with other formats, it's available in various types for copper or fiber connections.

CFP is among the newest transceiver formats, with the C standing for the Latin centum, as in 100.  As such, it's primarily intended for 100Gbps Ethernet systems.

The CFP format has several subvarients, generally called CFP, CFP2, and CFP4.  They are not inter-compatible, as each generation has become significantly smaller and more energy-efficient than previous gens.  The latest, CFP4, has less than a 6W power draw, compared to 24W for the original CFP format, while still supporting 100Gbps Ethernet in either 10x10 or 4x25 lane configurations.

Hummingbird Networks carries a full line of both name-brand and affordable 100% compatible transceivers of every type your business could possibly need.  Contact us today for a free consultation on which formats meet your business needs, or to discuss wiring options will best support your future business channel plans. We even offer a free trial of any of our optical transceivers for you to test.