How Meraki Helps Identify all Networking Devices On Your WiFi 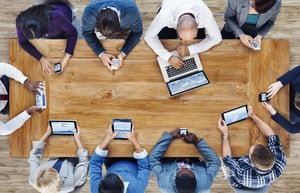 One of the hardest parts of maintaining a WiFi system is keeping track of who's on your system, and what they're doing with it.  Yet this is also one of the most crucial aspects of WiFi management.

There have been tools available for years which help WiFi administrators try to keep track of networking devices on their system, but there were no real magic-bullet solutions.  Usually, your best bet was two combine two or more tools, such as a network scanner along with a packet-sniffer, and try to correlate the results based on IP or MAC address.  However, this is often imprecise, as well as being difficult to do quickly or easily. The only other viable option was expensive pieces of dedicated hardware.

This is another area where Meraki shines, thanks to their innovative cloud-based networking system.  Technologies specific to Meraki allow it to actively monitor all networking devices downstream, from VoIP appliances to BYOD smartphones, and keep the administrator fully informed via the Meraki Dashboard interface.

Meraki is (currently) the only vendor on the network who builds full Layer 7 app-level visibility directly into their networking products.

Their packet processing engine is consistently scanning all packets, mining them for data and clues as to their contents.  These are matched with accurate profiles of every connected device, based on reported data.  These systems track packets at a much deeper level than hostnames and IP addresses.  The heuristic scanners can even penetrate deliberately-obfuscated packet types.

Meraki then takes things a step further yet, thanks to their cloud system.  Meraki maintains an ongoing packet signature database, with thousands of apps profiled and more added every day.  This system harnesses the power of all Meraki users to create a comprehensive database which can instantly identify packets from a vast variety of applications, both legitimate and not.

All this is displayed through the Meraki Dashboard in real-time, allowing admins to instantly see what networking devices are attached to their Meraki WiFi network, and what those devices are doing.

The Benefits Of App-Level WiFi Awareness

There are, of course, the obvious security benefits of being able to monitor all attached WiFi networking devices.  However, because the Meraki Layer 7 Visibility system is so robust, it can pay off in several different ways:

Because the Meraki Dashboard is a single-pane-of-glass interface, all this information is easy to manage.  Advanced WiFi network management which used to require a high degree of expertise and specialized tools\hardware is now simple enough that nearly anyone can do it.

You really can't keep too close an eye on your WiFi, especially if you have public-facing networks.  Meraki systems bring a new level of oversight and simplified management that can improve security across the board.

And if you're looking to implement your own Bring-Your-Own-Device policies in the near future, be sure to check out our free ebook "10 Steps For A Successful BYOD Deployment Strategy."