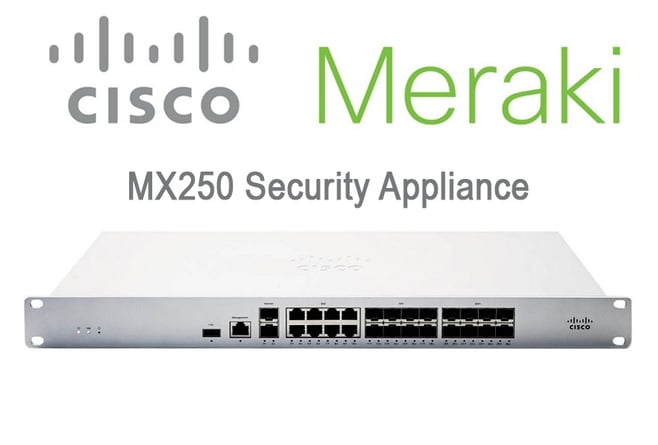 As we move into fall 2017, Meraki continues to expand the range of their devices.  This season, they're focusing on their firewalls and security appliances by releasing new models which fill in gaps in their existing product lineup, while also significantly boosting throughput.

The first of these to release is the Cisco Meraki MX250, which could be described as the lowest of their high-end firewalls.  It's aimed primarily at medium-large sized operations, although huge organizations could also make use of it in secondary or tertiary roles.  It prioritizes and includes a very generous range of ports to create a highly flexible device. 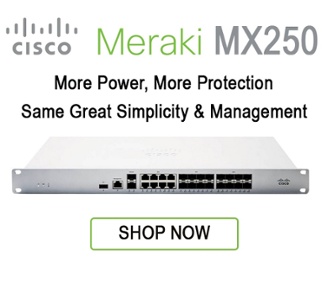 A First Peek At The Meraki MX250 Security Appliance

At heart, the MX250 isn't too much different from other Meraki firewalls and includes all the same standard features.  However, it includes a few key attributes:

The LAN ports eight Gigabit Ethernet, eight SFP, and eight SFP+.  The wide variety of ports are there specifically to allow it to be deployed in as many scenarios as possible, while always having the capacity to support downstream devices.

Plus, of course, you get all the standard features that make Meraki security appliances such an excellent investment, particularly if you add on the optional Advanced Security License - which we highly recommend.  With the ASL installed, the MX250 provides a full suite of security tools including URL filtering, anti-intrusion measures, and a constantly-updated anti-malware system.

Like all the Meraki firewalls, it's overseen and controlled by the Meraki Dashboard system.  This simple GUI lets you move from a "god's eye view" of your network as a whole, then drill down to specific devices, apps, or even users.  It's a remarkably intuitive and one which makes managing even a large or widely-distributed network quite easy.

All in all, the MX250 is easily one of the most overall useful firewalls in the Meraki MX series.  The 2,000-user maximum might limit its ability to support the largest of organizations, but for most medium-large businesses, it's going to be an excellent investment.