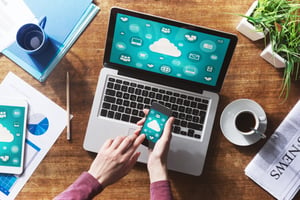 For years, one of the biggest complaints that IT managers have had about trying to implement BYOD policies with Apple devices is that Apple's proprietary walled-off architecture made their iPhones and iPads difficult to manage or integrate directly into Unified Communications strategies.  Now, it appears that situation is finally about to truly change.

The industry has known for nearly a year that Cisco and Apple had begun working together, but no one was entirely sure just what that entailed.  Now, a series of announcements and an impressive presentation at Cisco Live 2016 have finally shed a lot more light on the deal... and it looks like it's going to be a big boom for Cisco managers with a lot of Apple devices in their office.

As it turns out, when Cisco said they were working closely with Apple, they truly weren't exaggerating.  The new iOS 10 interface for various iThings will have deep built-in compatibility with Cisco networks, and a range of new options for MDM and UC integration.

This functionality will come through three major changes:

One of the biggest challenges in MDM for any device is trying to encourage users to spend their time doing work, rather than browsing Reddit or sharing cat videos.  So, iOS 10 will integrate a so-called "Fast Lane" for Cisco services.

When a Cisco or Meraki network recognizes an iOS 10 device, it automatically adjusts its Quality-of-Service policies to prioritize Cisco systems such as WebEx and Spark.  This optimization happens completely automatically, boosting bandwidth to mission-critical apps while putting unapproved apps in the 'slow lane' with less bandwidth support.

Apple has helped facilitate this by significantly increasing the number of QoS service classes to nine, allowing a lot of fine-tuning in bandwidth management.

Another issue with iThings in the past is that they weren't terribly good with roaming.  They had difficulty with intelligently picking WiFi hotspots, and switching seamlessly between them when moving around a large office or campus.  Now, thanks to Cisco's assistance, iOS 10 devices will be far better at switching seamlessly between access points and guaranteeing continuity-of-service in apps, especially bandwidth-heavy ones such as video messaging.

We touched on this in our series looking at Cisco Live, but it definitely bears repeating.  Spark will be directly integrated into iOS 10 at a deep level, allowing one-touch Spark VoIP calls from the same directory interface that users normally make calls on.  Spark contacts are treated exactly the same as any other mobile contact, making for seamless operation for users.

This includes all the standard iOS bells and whistles, such as being able to answer inbound Spark calls directly from the lock screen.  And, yes, Siri will be able to make Spark calls for you as well.

Coming This Fall From Apple and Cisco

So, when will you be able to start deploying these new improvements on your Cisco or Meraki networks?  Well... soon.

iOS 10 is currently in testing, on its third beta, and is available to developers and other interested parties via Apple's beta program.  Most expect that it will be fully released to the public in September, around the same time that the iPhone 7 is expected to be unveiled.  But this being Apple, those dates could change.

In the meantime, if you have a lot of Apple devices in your office, you might start letting employees know it'd be nice if they upgrade to 10 when it comes out.