The SFP and SFP+ formats are a wonderful invention, allowing a single piece of hardware - like a switch or firewall - to accommodate a wide variety of cable and connection types, simply by swapping out the connector being used.  Unfortunately, this also means that finding the right SFP/SFP+ transceiver for your application can sometimes be confusing and difficult, because of just how many connection types exist.

We tend to get a lot of questions about various types of Cisco-compatible 10g SFP+ transceivers, the differences between them, and which to use.  While not totally comprehensive, we wanted to address some of the most common inquiries we get about these popular and widely-used transceivers.

1 -How are single-mode and multi-mode fiber different?

The primary difference is how light is transmitted through the two fiber types.  Single-mode uses a single relatively straight beam of light, transmitted directly through a core of glass (or occasionally plastic) that's usually 50 microns across.  Single-mode accommodates large power levels, and is almost exclusively used for Long Range (LR) applications.

Multi-mode cable is more complex.  It utilizes multiple beams, which bounce diagonally throughout a somewhat larger (62.5 micron) core.  The beams are then collected at the receiving end and recombined.  This allows multi-mode to achieve high speeds at a lower power use -and usually slightly lower cost- but the nature of the format means that interference and signal degrading become an issue in longer cables.   So multi-mode is generally used for Short Reach (SR) applications.

This one is actually pretty easy.  SR stands for Short Reach, and LR stands for Long Reach.  SR transceivers are almost always multi-mode, and optimized for high speeds over relatively short distances.  However, the much higher-powered OM3 and OM4 formats can push that into the hundreds of meters for a single cable.

LR transceivers are designed for long-range communications, such as wiring buildings together on a large campus or even setting up a Metro Area Network (MAN).  They can be either multi-mode or single-mode, and are almost always intended for 100m+ applications.  Higher end cables and transceivers can support transmissions of several kilometers. 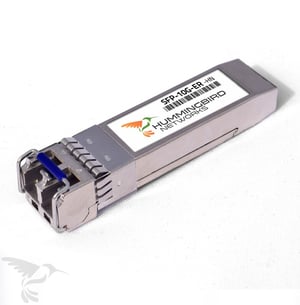 Basically, these are just extremely long-range fiber variations.  ER stands for Extended Reach, and can achieve transmission distances of up to 40km over single-mode fiber.

ZR is actually an unofficial format, which is not technically part of the IEEE 802.3ae standards for networking hardware.  It pushes the range of single-mode ER fiber out to 80km, or about 50 miles.  Several hardware manufacturers -including Cisco- have their own implementations of ZR, but they aren't necessarily cross-compatible.

Whenever you see -X, that means it has extended ability to operate under wider temperature variation, from -40°C to 85°C (-40°F to 365°F).  There is no other significant difference from the standard versions, and no reason to use -X equipment unless you're operating in extreme temperatures.

By comparison, standard transceivers are generally restricted to operating temperatures from about 0°C to 70°C (32°F to 158°F).

3 - What are Cisco "S-Class" transceivers and how are they different?

"S-Class" is a somewhat confusing standard Cisco introduced a couple years ago.  It could be seen as the "budget" standard - it costs significantly less than other multigigabit SFP+ standards, but also has a reduced feature set.  The idea was to create transceivers that only incorporated the features most commonly seen in enterprise and data center applications.

Aside from these differences, an S-Class transceiver is identical to the equivalent non S-Class variation.  So, for most standard applications, S-Class is fine and will save some money compared to other Cisco transceivers.

Of course, Cisco-brand transceivers will cost you a lot in any case, and unnecessarily so...

Turn To Hummingbird Networks For Your Transceiver Needs

To learn more about Hummingbird Networks brand transceivers, or for a deeper consultation on your specific transceiver needs, just contact us!