802.11ac was introduced to handle the new boom in devices that need to use a wireless network at faster speeds. Improvements were expected but the new features and products would come in waves, with the first wave 1 products introduced in 2013. Wave 2 products started becoming available in 2015. So, What are the differences between wave 1 and wave 2 products and features?

fewer people crowding the channels and slowing the traffic.

The performance speeds of wave 1 can reach 750Mbps for a single 3 stream client and can reach 250Mbps for something like a smartphone that is single stream. However, with wi-fi being shared, speed and performance is directly related to the number of people sharing a network and what it can support.

Data rates for wave 1 products are capable of supporting up to 1.3 Gbps with 3 spatial streams.

The 256 QAM that is supported by some ac AP wave 1 products has the benefit of increasing performance by about 30% but is only very useful in high-quality, low-interference settings, as with devices located in the same room. This makes it less applicable in business settings.

Wave 1 AP's are similar to 11n AP's which both support 3 spatial streams. This is done using a 3x3 SU-MIMO, a single-user MIMO, that only allows an AP's base station to transmit to one client at a time on a channel.

Channels for wave 2 products would mostly move from 80-MHz (at the high end for Wave 1) to 160-MHz (80+80) bonded channels. Moving up to 160-MHz is good for bandwidth since it is similar to adding more lanes on a highway. Theoretically using 160-MHz bandwidth means more users can be supported with better performance. However, operating at 160-MHz requires a clear channel and may mean that most AP's continue to use both 80-MHz and 40-MHz, even through the wave 2 switch.

Data rates for wave 2 products are expected to average around 2.5 Gbps, but real life may even be lower.

Wave 2 products introduced 4SS or 4 spatial streams and could increase performance by up to a third. This would require both AP's and clients to add an additional fourth antenna.  In other words, if you don't have the 802.11ac hardware on your client device, it won't matter.

One of the biggest upgr 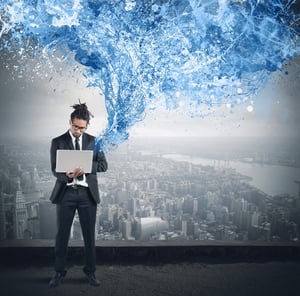 ades in wave 2 products is related to MU-MIMO. This is the multi-user version of MIMO technology that allows a base station to transmit to multiple users (up to 4) at a time giving several clients simultaneous access to a channel. This means AP's can transmit to 4 single-stream devices such as 4 smartphones at once. The multi-user format is meant to boost user capacity. The MU-MIMO must be supported by both the AP and the client to be used since it relies on interoperable beamforming. Some wave 1 products that use SU-MIMO have integrated beamforming to improve the performance, making MU-MIMO less of a stretch.

If you would like more information about 802.11 ac wave 2 give Hummingbird Networks a call and feel free to leave a comment or question about wave 2 below. Be sure to get a free trial of Meraki's wave 2 access points to see the connection speeds for yourself.

(sorry we could not resist putting in 2 wave pictures :)