What is Blockchain, and how does it benefit security? 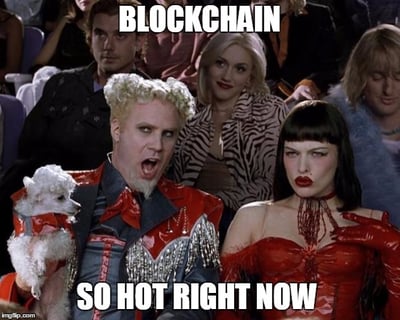 Almost without doubt, one of the hottest buzzwords of 2017 (and possibly beyond) is "blockchain."  This technology, first pioneered as one of the backbones of the Bitcoin distributed cryptocurrency, has been garnering increased interest from a range of big businesses.  People have started speculating about its ability to be utilized in applications ranging from brick-and-mortar banks to Internet-of-Things network security.

Is blockchain technology likely to be added to your list of security features any time soon?  Let's take a look at what it is, what it does, and whether it seems likely it will make the leap from cryptocurrencies to more mainstream usage.

The Basics:  What Is Blockchain?

Simply put, a blockchain is a public ledger of transactions which is shared between all participants within that blockchain's network.  In theory, blockchain is unhackable because its distributed and shared nature makes it effectively impossible for one actor to alter the ledger invisibly.  Every computer in the blockchain network is independently verifying the records.

Digging in a bit further...  Blockchains use a shared database, which utilizes a Peer-to-Peer protocol set up to allow the database to be updated whenever any user of that blockchain updates the database.  Rather than each individual entry being its own update, a large group of transactions are bundled together into a "block" of updates.  Each block contains a cryptographic hash of itself, as well as a hash of the previous block.

Due to how the hashes are made, it's (in theory) impossible to falsify an entry within a block without also changing the hash of the previous block.  Therefore, if the hashes contained in a current block match the previous block's hash, it's considered valid and added to the public ledger.  In this way, the block-by-block-by-block verification method creates a chain of validation, giving the protocol its name.

And if we sound doubting by using "in theory" repeatedly, it's only that we don't like the idea of ever dubbing something "hack-proof."  However, blockchains have thus far been extremely resistant to attack.  Any articles you might have read about attacks involving Bitcoin have NOT involved attacks on the blockchain itself.

The obvious use for blockchains -and the reason they were invented- was to create a way for Bitcoin transactions to be made securely, and without any central entity being responsible for balancing the books.  As such, blockchains could be easily implemented in any other financial sector to serve the same purpose.  Banks are already interested because of this, and similar entities like the NASDAQ stock market are also investigating their usage.

But what about areas outside of the financial industry?

Well, blockchain could enable secure micro-transactions, such as on websites or with IoT devices, without relying on credit card companies whose margins make micro-transactions unprofitable.  They're also being explored as a way of expediting and securing contracts and leases, such as buying\selling a car or a house.  Some governments are even

getting interested in this aspect since it would make deed-tracking far easier.

Going beyond financial matters entirely, blockchain could also be deployed in industries such as healthcare, where protecting customer records is of utmost importance.  The hospitality industry is also exploring ideas for working blockchain into customer loyalty programs, to increase security while expediting the validation of transactions.

In other words, blockchains could potentially be utilized in almost any database-style scenario involving:

Is Blockchain Coming To An App Near You?

Not yet, and that's the rub.  Everything we discussed in the section above is largely theoretical.  Companies are exploring such ideas and investing money into developing customized blockchain-based solutions, but very few -aside from crypto-currency- are actually on the market yet.

Will they come?  It seems likely.  Blockchains thus far seem to have very few drawbacks when implemented properly in an area which can benefit from them.  The only "drawback" of note, depending on the situation, is that blockchain transactions are irrevocable.  A Bitcoin transfer, for example, cannot be reversed in the same way a credit card charge can be.  If X sends money to Y but changes his mind, the only way X gets his money back is if Y voluntarily sends it back as a separate transaction.

In all likelihood, by the end of the year we'll be seeing the first real steps towards mainstreaming blockchain technology.  How well it works out in other applications will largely determine whether it's adopted at large.

This will be a fascinating area of development to follow, and we're very interested in seeing whether developers find ways to apply it to networking as well.

Let us know your thoughts on blockchain and if you think it will become the new standard in security below!