Star Wars and Network Security: Is Your Network Using the Force? 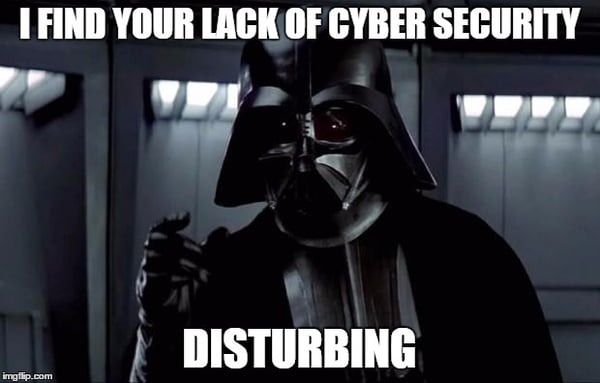 As true technology geeks we're all big fans of Star Wars here at Hummingbird Networks. With today being "Star Wars Day" we thought it would be a great time to share what we have learned about cyber and network security from the Galactic Force. The Empire had a pretty weak security infrastructure, I mean the Death Star was taken down by a small security gap.  They failed to take the proper risk assessment and underestimated the power of security threats, not to mention their lack of BYOD security.

If you think about it R2D2 was just one big USB stick that was plugged into the Empire's network and able to access the most private information. The Death Star plans R2D2 was able to display weren't even encrypted ultimately leading to the demise of the Empire. There was also an apparent lack of information verification required in order to gain access to what should be secure areas. One of the biggest mistakes the Empire made was to underestimate the skill level of their attackers. Similarly to many corporations, the Empire under invested in their cyber security  and were sub sequentially taken down by a small group of "hackers".

Now, even though we may not be able to take down the Death Star or have a lightsaber duel with our father, we can still take away some pretty good tips that can be applied to our own infrastructures. See our infographic below to help determine if your network can succumb to the dark side.

In order to keep your information safe you must have a security system in place and nothing is better than a next-generation firewall at protecting you from threats. If you're concerned about your network security contact us for a security assessment. Our security Jedis can help you strengthen your IT surveillance.