How Outdated Hotel WiFi Systems Leave You Vulnerable To Lawsuits 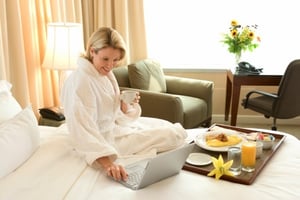 Poor WiFi implementation can leave you open to a lot more than just spyware. Is your hotel WiFi secured against the legal threats it may face?

It's something a lot of hotels don't realize, or don't want to acknowledge: You can be held legally liable for activity undertaken by users on your hotel wireless network. In other situations, you could also be liable for data intrusions and, especially, theft of customer records.

WiFi is a great option for expanding the appeal of your hospitality business, as well as for improving internal productivity. However, like any change to a business, it has to be well-implemented with an eye towards security to ensure that it remains a benefit to your organization, rather than turning into a liability.

Ways Your WiFi Might Be Leaving You Open To Legal Liability

This is a somewhat tricky area, because the various lawsuits and decisions on the subject haven't been entirely clear on where the line between host and user is, in terms of liability. However, this doesn't change the fact that if the MPAA or RIAA sees users at your hotel downloading music or movies illegally, they'll be sending angry letters to you demanding that this activity stop.

And under the DMCA, it's legal for them to have your ISP shut you down if piratical activity continues after repeated warnings. This can also be true for other forms of harassment or online lawbreaking. So, this is an area where it's going to be much better to simply prevent questionable activity, rather than gamble on a protracted legal battle in an area where the law is not settled.

We suggest a three-pronged approach here, for maximum protection:

Again, the law is not set here, but these three things in combination send a clear message that your organization is doing just about everything plausible to prevent illegal WiFi usage.

The other major legal stumbling blocks for hotels, as well as any organization implementing WiFi, is the increased possibility of data intrusions. If someone gets ahold of your customer data, especially private information like credit card numbers, you could potentially be on the hook for millions in fines and damages... and that's on top of the PR nightmare the situation would create.

Again, there isn't a hard line here, but generally things go better for businesses in this situation according to how much they had already done to prevent data intrusion. As such, we recommend:

Now May Be The Time To Update Your WiFi

If your internal network or WiFi setup is more than a few years old, you probably do not have sufficient protections to ensure your hotel is protected, legally, in situations where your network might be used to facilitate illegal activity. If you aren't taking proactive steps to protect yourself, you could be left open to significant damages.

The good news is, upgrades are easier and cheaper than ever before, especially when you trade in your existing equipment. If you want to keep enjoying the benefits of WiFi, without worrying about new legal developments from the last few years, just contact Hummingbird Networks today for a free consultation!